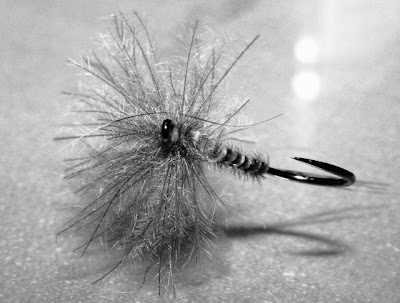 OK, we're a long way from spring, but once you get into January, I can't help but start to think about longer days and a little more sunshine. There are even a few bulbs springing in the garden, and then thoughts turn to April and the start of the New Season. Over the bridge, and the season is even closer. So my thoughts turn to tying dries and small nymphs rather than heavier bugs. The thought of chucking neat loops with a 6' rod rather than swinging Czech Nymphs with a 10 footer... it doesn't seem that far away.

I'm sure we still have a hit of snow to reach us before Spring starts properly. But it's the anticipation isn't it? Sure there are more Grayling to be targeted first and a few casting sessions are starting to book up. However, I can already sense the enjoyment from that first trips of the season.

In the meantime, and between sessions at the vice, whet the appetite with the supreme photographic skill on display in Catch Magazine. Enjoy!

If restricted to just 5 dry flies for the river, and 5 nymphs what would they be.

To be honest, I carry very few other flies all year. Pkenty of variants, but I believe in the patterns I have and am confident that I have what I need 99% of the time during 99% of the visits. You keep learning and tweaking the patterns though. It's all about confidence.
~D