Yesterday was the Open Day for the Orvis stores, throughout the country. Burford is a really beautiful town situated in the Cotswolds, between Cheltenham and Oxford. Near the store runs the river Windrush.

There were alot of people through the doors - often sporadic. There was a fait bit of interest in the fly-tying and certainly we managed to fuel the interests of some of the children that watched - the future of our sport. It was great to see the look on their faces when they managed to tie their first fly. 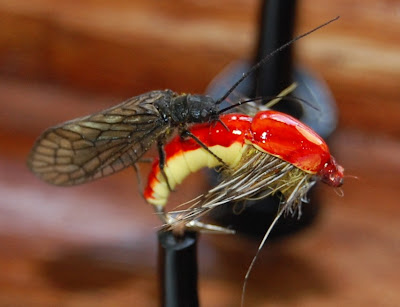 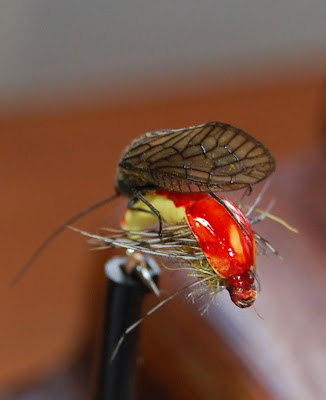 The artificial is pattern designed by Steve Thornton. Click here for a tutorial by Dennis Shaw for its tying.

Here's a shot of Dennis Shaw's Hopper flies - not a usual pattern in the UK, but certainly effective. It's accounted for some big wild fish! 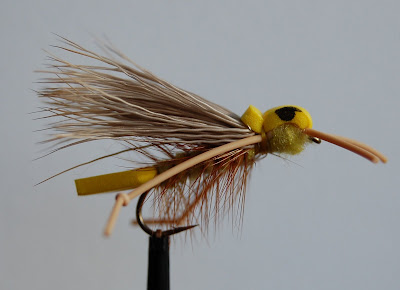 I mainly tied dun and spinner patterns, with a few nymphs and soft hackles thrown in. Here's the sort of thing: 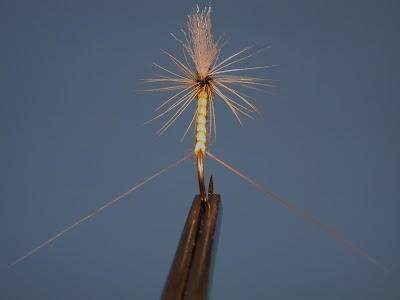 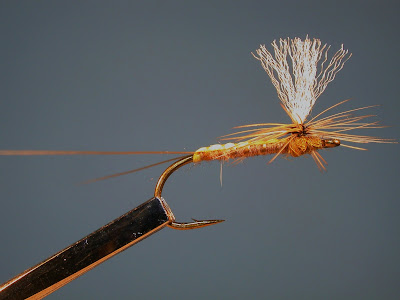 The idea behind this particular fly was to use the tail splitting floss as the top of the abdomen.

Also present was Jim Williams from the Wiltshire Fly Fishing School. He was demonstrating how to tie furled leaders. This was a really fascinating process - simple, but incredibly effective. The turnover in these leaders is truly amazing. I certainly plan to road test these this season. They have so many applications from Czech nymphing through to dry-fly - and everything in between. Take a look at the Jim's Furled leaders website - he isn't taking orders at the moment, but will do very soon. Definitely worth the tiny price for something so long lasting and effective. When I get my hands on the leaders, I'll let you know how I get on.

By the way, I've just added a rolling gallery to the right.

The link takes you to some of my wife's art work. Please take a look ;-)