A bright, windy day full was full of promise at the river today. There were plenty of Mayfly fluttering through the air and enough of them sailing down the river and being blown off course to give the fish some easy pickings. Sure enough, there were a few being targetted, although the fish were not taking full advantage; mayfly managing to travel considerable distances and full of commotion, but remaining untouched.

A quick check of the cobwebs on the fence told the story of yesterday evening's spinner fall: 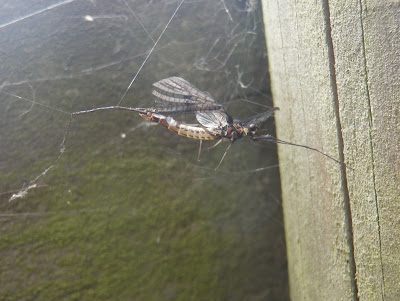 I tend to use a #1 or #2 set up when tackling smaller streams with the dry fly. However, when the Mayfly are on the card, I often step up to a #4 and tpday was an opportunity to test out a recent purchse: A Barrio GT90 WF#4 line. A supple, cream coloured line, I was looking forward to putting it throught its paces. 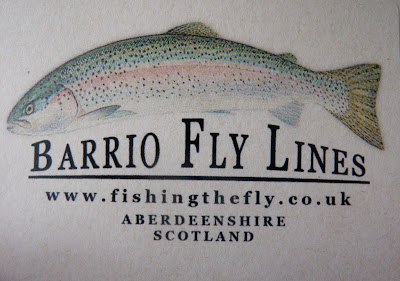 I made the first casts over grass to get a general feel for the line. Impressive to say the least, it loaded the rod (A Scott E2) very nicely even with a shorter line out. Extending the line, the cast became smoother with neat, tight loops. Hugely responsive and well balanced, I was really looking forward to getting in the river and making the first few important presentation casts.

The GT90, as with the GT140, has an almost continuous rear taper. Great for aerialising lots of line. OK, so not that important for fishing smaller streams, but this line allowed even a chunky mayfly pattern to be delivered positively and accurately every time. In addition, the line allowed very gentle presentation.

For more info on the line, click the link: Barrio Fly Lines

There were plenty of duns fluttering, but spinners started to show. Here a male spinner dries its wings: 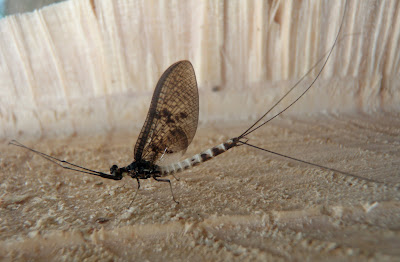 Whilst the fish were showing an interest in my May fly imitation, several fish were coming short. A change of size seemed to make little difference, but it was seeing a fish chase an ascending nymph and shatter the surface as it did so, that I made my choice to switch to the nymph. Mayfly nymphs are considerable specimens and a large imitation fished slowly and with an induced lift can work wonders.

Eventually, a decent fish turned on the nymph. After a few scarey moments as the fish made every effort to find the roots, I slide the net under a fine brown: 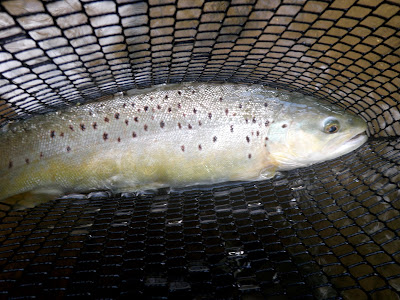 At 17" it's my best fish of the season so far from these small rivers. The nymph found favour amongst a decent Mayfly hatch. 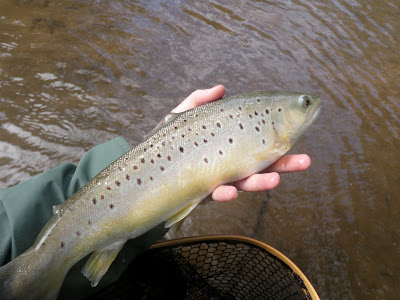 Any chance of a picture of the nymph which did the damage? I have tried Walker's and a few other specific mayfly nymphs but have never had great success with them. Generally a size 12 hares ear will get a swim but would be very interested to see your mayfly nymphs.