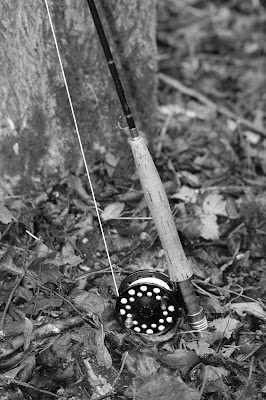 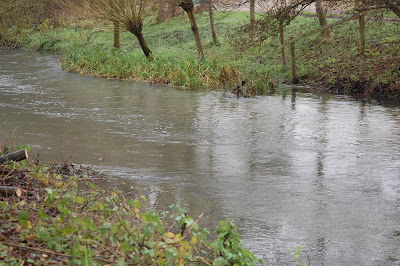 The forecast was spot on and the cold weather certainly put in an appearance. As made the hour's drive, the temperature continued to drop and it was a cool -2 degrees when I finally arrived. Several layers under neoprene waders was a minimum. On this beat you have to wade to get the best from the fishing. On the 1st December, this ceases and all fishing must be from the bank. This is to protect the salmon and trout redds as they start to spawn. 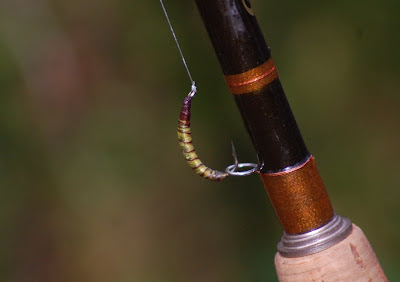 Heavy bugs was the call for the first couple of hours with little to show for my efforts. I spotted a few out-of-season browns (one about 2lb) sitting in slack water near the fishing hut. The water was carrying a little colour - the 'misty' colour that even chalkstreams take on when there has been some rain. The call for warm coffee and an escape from wading was essential. The morning passed and we approached the 'warmest' part of the day. 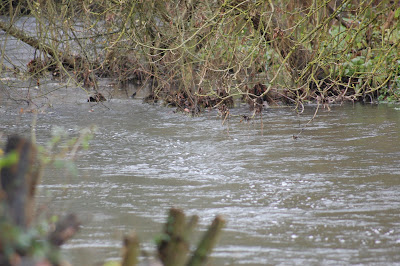 Amongst the seams of current I started to notice a few rises: just one or two at first; then more. Enough to encourage me to uses Klinkhamer with a tungsten-beaded nymph fished New Zealand style (with the nymph's tippet attached the bend of the dry-fly's hook). There was immediate interest in both. Sometimes a fish would pluck at the dry-fly. Other times, the dry just vanished indicating the nymph had been taken. The grayling were responding to the hatch of olives: the emerging insects carried by the current with small grey wings - like tiny sail boats. 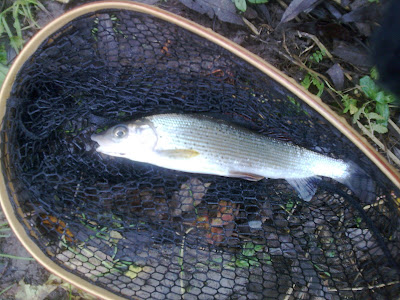 Several grayling obliged; as did a big old trout that , judging by the state of its fins had already started spawning. Slipped back, I moved on to avoid catching any more out-of-season fish.

The grayling had their fill and within an hour it was back to the odd rise. The best of the sport was over. Back to the bugs for the last hour, but it was the dry that had reigned supreme today - even in the cold.


Posted by Dave Wiltshire at 10:10 No comments:

I am hoping to fish on Saturday. Forecast is for a very cold NE wind and temperatures not managing much more than 5 degrees. Fishing the Wylye valley usually means that the temperature stays even lower: I've had days when apparently the sun has been shining, but with the fog being heavy in the valley, it never made it above the magic zero degrees. 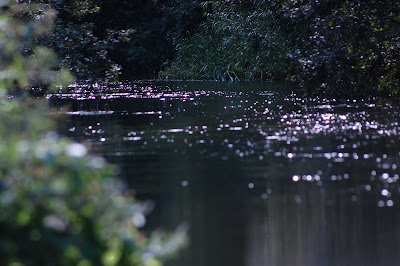 The Wylye (when it's a little warmer!)

When temperatures are that low, grayling will tend the shoal up and huddle in pods... sometimes tens of fish strong. However, they will usually feed at some point. The fly needs to be at the right depth the right size and acting in the right way. Suprisingly pink flies succeed. They imitate nothing-in-nature - well at least not to us. But do fish really see colour? Perhaps. But, I believe, not in the same way as we do. I have heard many, many arguments and discussions about this. We may never know. However, one idea that has always stuck with me is that pink is seen as a more neutral, grey colour. A colour (or shade?) that we do not perceive?


Either way, on a cold day with clear water, a pink fly can often persuade a grayling to take. Sometimes it needs to be big and bright, just like the previous pictures I have posted. Sometimes, just a hint of pink... 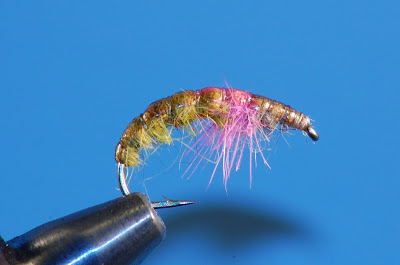 This hot spot 'Czech Nymph' is formed with a pink hen hackle - spun in a split thread. An interesting alternative fly.

Sometimes, a smaller fly, but equally bright will work. On their day a small pink-hackled spider ('soft-hackle) fly will bring the goods... 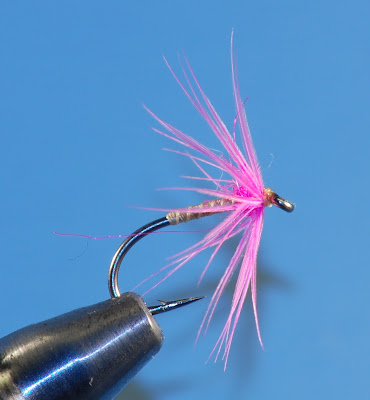 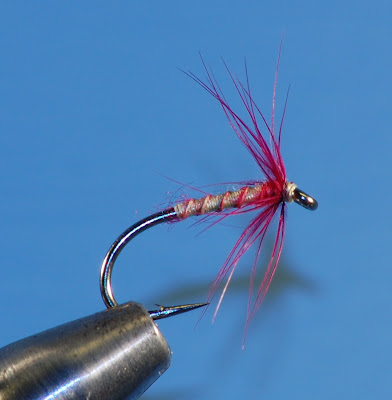 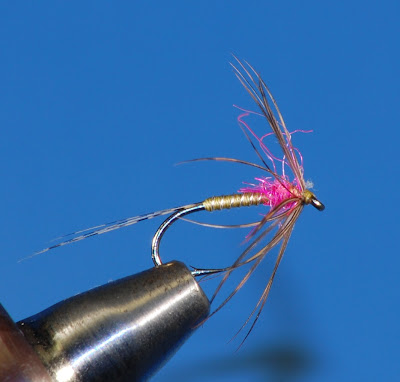 These flies' hackles pulse in the current and really give the impression of life - a sure imitation of olive or caddis larvae. Such a pink fly is, I suppose, quite extreme: it could make the purist of fly fishers wince. But why not use them? Well if they work...
More subtle, suggestive flies may be required though. Grayling can be very choosy when the mercury drops.
It always amazes me that, even a rise of a couple of degrees will see some olives start hatching. It doesn't take the fish long to adapt and start to rise. The hatch may only last for ten (maybe five) minutes, but a well placed emerger or dry will often bring the goods: 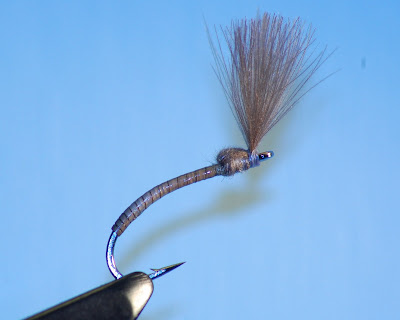 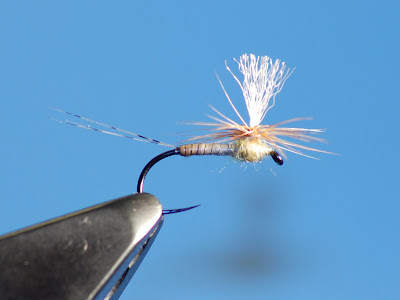 These two flies are some of the latest creations, using Rob McLeans Quill Bodies. A realistic alternative to dubbing bodies.

Hopefully the grayling will be ready, waiting and hungry when I get there tomorrow.

Tight lines.
Posted by Dave Wiltshire at 17:49 No comments:

Since colder, wetter weather seems to be creeping upon us (could we actually be faced with a cold winter this year?), grayling are starting to shoal up in deeper water. This calls for heavier, leaded flies - some of may favourites being gammarus (shrimp) imitations. 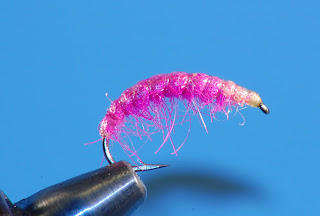 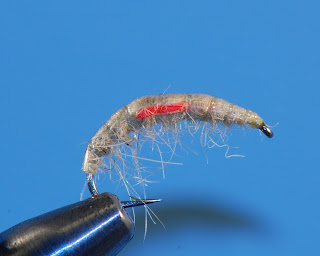 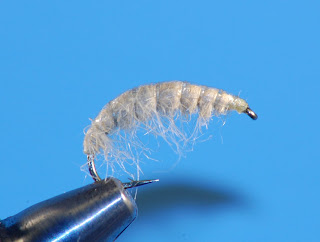 
All of these are given two layers of flat lead for ballast and are tied on #10 Kamasan B100 hooks.

Everyone has their 'thing', their 'interest', their 'passion'. For me, fly fishing and tying flies draw together my interest in the outdoors, science, art and relaxation whilst offering continual, new challenges. More than that - you never stop learning.

I see the blog an opportunity to share some ideas and thoughts; a chance to air ideas about this fascinating interest. Over the last few year I have found great pleasure in sharing ideas. I hope the blog allows to me to progress even further with this, letting me post my thoughts, creations and findings about the pursuit of catching wild trout and grayling with a fly.

Those that read the blog that share my interest in fly fishing, I hope, appreciate why I have started it, enjoy reading it and may even contribute. I hope that those readers that have never experienced fly fishing read it with interest and understand why people become so absorbed in this great past-time and sport