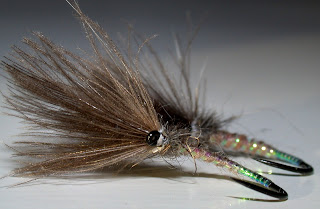 I have been off line with a faulty laptop for the past few weeks, but I am delighted to be back up and running now. There's not much fishing going on with the amount of rain we have been having (at last!), but there will be an update from the vice very soon.

Nice to see there are a couple of new followers too, so welcome along. Back soon!

The rain has helped to push the level of my local rivers and streams up at least a little. I was introducing Michael to the river today, who was travelling from Middlesex to do battle with my local trout. The whole day was set up in support of the Monnow Rivers Association and fingers were crossed that Michael's long journey would prove worthwhile.

There were signs of rising fish from the off and we went off exploring the fast runs and riffles where the fish were likely to be hiding. Michael put his 6' #2 through its paces. I dare say we could have found earlier success, but we were both keen to target some rising fish - with the hope of some larger than average specimens with the dry fly.


With patience, we soon found rising fish for Michael to target and with some crouching and crawling, it wasn't long before a fish rose to his caddis pattern and a healthy bend formed in the rod. Parting company shortly after, it was to indicate the sort of stealthy approach required for success here. Shortly after, another fish obliged to the Caddis imitation.
As the day progressed, Large Dark Olives were taking to the wing and we were treated to a decent hatch around midday. As Michael slid into position, I was able to watch the fish from a concealed location. Fish watching is never wasted time and it was great to watch some very plump brown trout swinging in the current. picking off emergers. Worthy of note was the vast distance each fish would move across a pool to take an insect.
Eventually the fish turned onto the LDO Duns (sub-imago) and switch to a loop wing dun with collar hackle seemed to be the key:

Well done to Michael - he found some success with some very picky, wild fish. Many thanks to him for his generosity towards the MRA.

If you wish to join me for a day's targetting of some wild brown trout, please email me here or visit the River Fly Box. 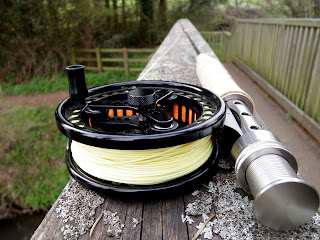 That change of wind direction has made a huge difference today - depsite the sun, the bitter northerly seems to have put the fish (and the fly life) down. At least there was some rain in the air this afternoon and more forecast for tonight and tomorrow. 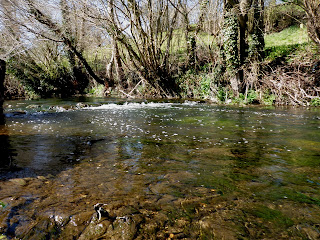 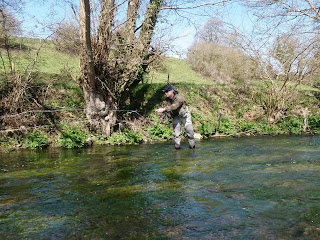