The arrival of snow transforms any landscape. The river is no exception, seemingly even more inviting for pursuing grayling with the resulting crystal-clear water: 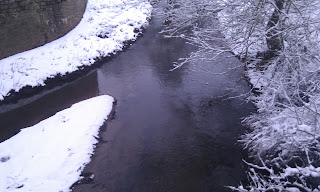 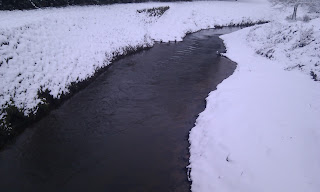 With the river having been punished over the last few months, it is very pleasing to see the water starting to drop back within its banks and the colour to disappear. With that, the whole system starts to look very promising for some winter grayling. The fish are hungry too, and with the slowing of current and change in clarity, the fish are certainly happy to feed. 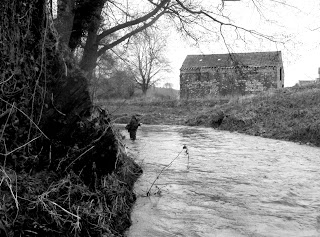 I am reliably informed that we are due a cold snap and I'll be watching the forecast with care. However, today was unseasonably warm and there was even the suggestion of a few olives hatching. Well, at 10 degrees and upwards, I am not surprised. 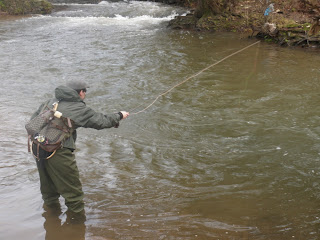 Aim of the day was to catch Mike Snelson his first grayling of the season and it wasn't long before he was working his heavy bugs through some very inviting water. Soon enough, his efforts were rewarded and he was able to slide the net under a very handsome grayling.

Returning fish safely is imperative, but grayling need special care. Hold them in the flow for as long as they need. With very big grayling, their recovery can take a very long time. It's always reassuring to see them kick and slip back into the depths, just as this fish did shortly after obliging for the release photo : 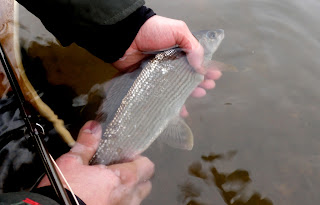 The fish kept coming too and after nudging a couple of fish from one pool, eventually the rod bent into a decent fish: 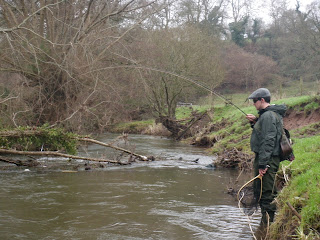 Can it really be correct that 2012 is the second wettest on record? It certainly seemed to be raining more than any other year I can remember, and what a strange year it was. Glance back through the early months entries on the blog and is littered with concerns about painfully low water levels and silt deposits.

Well perhaps we can hold off with the rain dance for the time being as the ground is saturated and rivers have taken a bashing. However, on a positive note, the water table is at last at a healthy level and there are high hopes for the 2013 season.

The fishing in the end of 2012 was fristrating to say the least. Cancelled trips and days were unavoidable and when I braved the elements alone, the river was often carrying too much colour to be consistently successful. However, the 1st of January was aptly a fresh beginning. The rain eased and the sun even shone. The rivers have started to fall (albeit slowly) and, most importantly they have started to lose their colour.

Grayling are the target and with a thoughtful approach, seeking out the creases between slack and current and fishing with care the slower sections, the fish are there. After the floods, I am pretty sure they're hungry too!

Taking extra care with your wading is essential after these heavy waters have pushed through the system. Today, the river is still running high and wading is tough in places. However, the current can easily scour out new holes in the river bed and shift gravel around. Therefore, a cautious approach is essential.


With alot of standing water remaining, levels will be high for a little while yet. In addition, there has been a few showers adding to the already saturated ground.


I approached the river with high expectations today as the river had cleared significantly. My favourite Maxia MX4 10'#2 was set up with two heavy flies, sporting 3.5mm tungsten bead. I also like a little colour on the flies to make them obvious in the stained water, usually in the form of a small tag of hot-spot. With just 18" between the flies, it was easy to find the required depth and comb the bottom in all but the fastest of stretches. Eventually the furled indiciator twitched and I lifted. The solid resistance I felt suggested a good fish. It's jagged fight had all the signs of a decent grayling, but when it rolled to the surface, it was an out-of -season wild brown trout. And what a fish... at 16" it was in prime condition and I slid it back, none the worse for its visit to the net and a huge boost in confidence for the 2013 season (how long until spring?).


The next cast resulted in a clear run, with no hesitation. However, the next saw the indicator slip forwards. A strike set the hook into a fish that thumped and stayed very deep. With the fast current around my legs, getting the fish to break surface was tough. I'll admit to feeling a little under-gunned with a 2 weight. Eventually I coerced the fish up, only to see 3lb of angry rainbow trout break surface. With the net at the ready, the fish made one last bid for freedom and frustatingly achieved it, throwing the hook. Surely washed from a flooded stock pond further upstream, there is no place for large rainbows in these rivers. So this escapee has had another chance at freedom. I'll have to hope I meet him again soon.


Having contacted two trout, I moved on to try and avoid any other out of season fish, but the grayling were proving difficult to locate. Interesting that on the days when grayling show, I rarely catch any brown trout. The opposite often proves to be true. Food for thought. 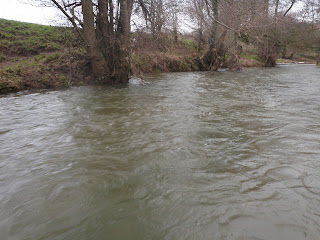 Happy New Year to you all. I hope 2013 brings you all your fishy dreams. Fish thoughtfully and wade safely!


Posted by Dave Wiltshire at 19:47 No comments: