Let's face it, perfect weather on a bank holiday is the exception and not the norm. With a warm weekend though, Monday saw a shift in conditions. 'Changeable' weather conditions can often ruin a good day' fishing, especially when you are expecting some considerable Mayfly (E. Danica) hatches. Other times, these potentially unfavourable conditions play to our advantage.


Strong wind puts many off, but it was well worth perservering on Saturday. A strenghtening breeze was blowing Mayfly Duns all over the river and it was a matter of searching for areas where these helpless flies were congregating, as the fish were quick to make the most of the offerings. 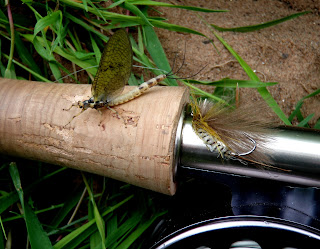 Infact, many of the duns were struggling to dry their wings and take to the air without being blown over. Others that had been more successful found themselves blown onto the surface. I even played around with a more splashy presenation to imitate this. And it sent the fish crazy, slashing at the flies almost instantly. 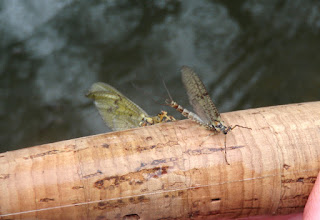 However, my attention was turned to some very good fish feeding in a tucked away corner, positioned at the end of a wind lane. Such condition are challenging as these fish were cruising around the pool, knocking off duns as they moved. Spooking such fish is very easy, especially when several fish are moving.

After making contact with several smaller back markers, being careful not to allow the fish to disturb their bigger cousins upstream, I was in position. First cast resulted in a porpoising rise that I duly missed! Was that the only chance? Waiting seemed an age, but eventually a fish showed again which I hooked. A plump fish of just over the pound was pleasing, but not the bigger specimen I had hoped for. A longer wait and eventually a large head and shoulders appeared to engulf my Dun imitation.


With a good fall of rain on Tuesday, the river had risen a little. The wetter weather seems to have really spurred a flush of Iron Blue Duns to hatch; loved by the fish.

Another fish, this time 2lb 5oz, graced the net this afternoon. The forecast is for more rain. Whilst the weather remains inconsistent, the fish are proving quite reliable.

Two bites of the cherry...

With the forecast looking pretty poor for the coming week, getting out to make the most settled weather is essential. Whilst we are a couple of weeks behind where we should be, a few Mayfly have been showing and some lighter winds and longer spells of sunshine are exactly what was needed.

Plenty of Caddis and Alder Fly were fluttering over the water mid-morning and, although a few fish were happy to feast upon them, I couldn't help feeling they were holding back for something more substantial. And so it came. Not the flush hatches of Mayfly seen this time last year, but a steady trickle of duns by 1pm started to get the fish interested. 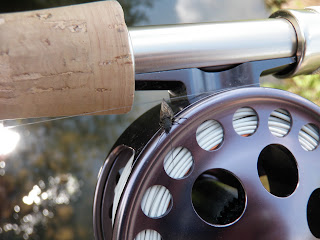 First cast of the year with a Mayfly imitation brought instant success and a great scrap from a very fit wild brown: 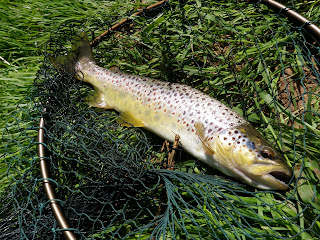 The beauty of this time of year is that, whilst you can make the most of the Duns in the middle of the day, it is always worth returning in the evening to take advantage of the fall of spent spinners. With stacks of midge filling the air, fish were happy to sit back and sip at the spread-winged spinner: 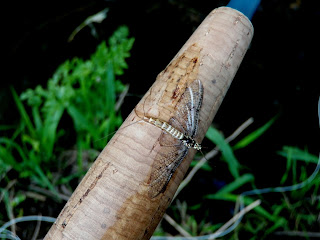 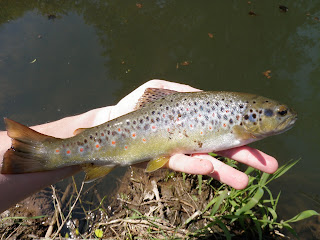 ~Dave
Posted by Dave Wiltshire at 22:47 No comments:

Twelve months ago we were facing very warm, still weather and it gave some spectacular Mayfly hatches. Especially the fall of the spent spinner right into the darkness. With the cold spring of 2013, predictions are that we are a good few weeks behind the usual. However, Mayfly (Ephemera Danica) are starting to show (the first was spotted on Sunday 19th May) and, whilst the fish may not be fully 'on them' yet, caddis and Olives are readily being snatched from the surface.

I always love May and June. Can't think why... 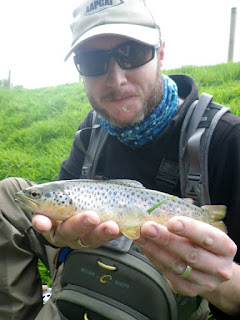 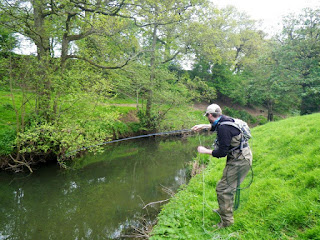 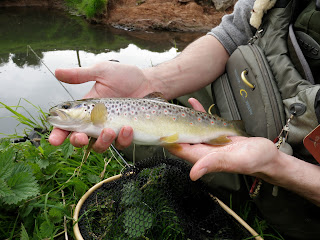 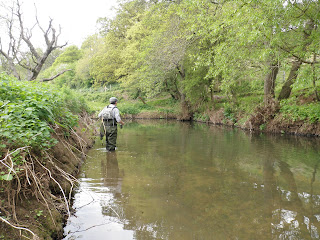 Looking forward to the Mayfly really taking a grip.

~Dave
Posted by Dave Wiltshire at 21:11 No comments:

Well, firstly my apologies for not updating the blog for such a long time! A house move has rather hampered my chances of getting to the computer and any spare time has been given over to getting on the river. It has been a tricky start to the season with cold winds and lower than average temperatures. I haven't fished much for myself so far, being pretty busy with teaching on the rivers and the lakes - and despite the weather, the sessions have been really successful.

I have been holding out for some better hatches and the recent warmer weather gave some good caddis hatches and kept the fish interested right into the fading light. That gave me some good dry fly sport - at last!

Last Sunday saw the Salisbury & District Angling Club's annual open day. It was a sunny and warm day and, being well attended, it was a busy and successful event. Running some casting sessions with other AAPGAI instructors, it was great to see such a high standard from may of the participants. Plus it's a great time to catch up with people and chat all things fishing.

Back on the river tomorrow for some teaching. Fingers crossed the rain doesn't spoil things.

Oh, and I'll get some pictures posted too. Just as soon as I figure out which box the USB cables are in...


Posted by Dave Wiltshire at 21:10 No comments: