Too much festive endulgement can be best resolved with a little grayling fishing and with the promise of a spell of warm sunshine, myself and Nick made our way to the River Anton, a tributory of the majestic River Test.

Cloud cover was fairly heavy as we arrived at first light. Chatting over flies, leaders and rods really started to get the imagination fired and anticipation of sight fishing for some of the river's larger inhabitants had begun.


Tactics were to start with longer rods and heavy bugs, starting at the bottom of the first beat and making our way upstream. Nick was armed with the French leader and a Bi-Colour mono indicator. I stuck with the hi-viz fuled leader and a shrimp pattern.


Whilst there were a few fish about, sight fishing was tricky due to difficult light condtions. Indeed, we really needed a break in th cloud to help us locate our target. In the meantime, a stealthy approach and running the flies through likely runs seemed the best tactic. It wasn't too long before Nick made forst contact - albeit it a small fish.


Trout were evident in numbers and they were very active. There were redds on display too and fish were clearly in the midst of spawning.

Eventually a size 18 Tungsten bead PTN was seized by a small grayling and my first fish came boucing to hand. Cloud cover was remaining and it was making fish location a real challenge.


The wind was picking up by mid-morning and we had not been treated to the brighter conditions promised on the weather forecast. Despite this cooler breeze, a few Large Dark Olives were showing themselves -offering some hope of better sport as the day moved on.


An unsettled band of weather started to move through with string wind and some rain, making delicate presentation of the fly more challenging. Using available bankside vegetation was essential to conceal our presence and also reduce to the effect of the poor weather.

However, brighter skies were following the storm and soon the wind had dropped and the temperature rose slightly - enough to get the fish a little more interested in our offerings.


Nick stuck again with a bigger fish this time - in need of the net - and a sigh of relief that the day had produced a quality fish.

A change of fly was enough for my first decent fish of the day. A dogged fighter, I was pleased to put the net under a 1lb 8oz grayling - in fine condition.


Another fish graced my net shortly afterwards, this time tipping the scales to 1lb 10oz. The switch had been flicked and as I landed this beautiful fish, Nick also hooked a decent grayling just downstream from me. 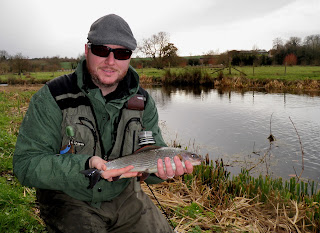 But it was the next drift through that really produced the goods. A delicate movement on the furled indicator saw the rod cushion the dives of a bigger fish. Slipping the net under the fish and I was sure we had a decent 2lb+ fish on the bank. Indeed, the scales slid to 2lb 2oz - and what a prime conditioned fish it was too. 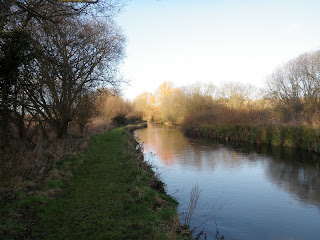 A few more fish followed from this impressive river. In less than ideal conditions we managed to connect with some really fantastic fish and really blow out those Christmas cobwebs.

Now how about a 3lb fish? Happy New Year!

Great write up Dave. The pics are excellent. Looking forward to returning when the conditions are more favourable!

Well done fellas. Although the conditions are difficult, there seems to be a lot of quality grayling about this year. The Wylye was on fire yesterday.

Excellent collage of pics and concise text Dave, I fished Wylye on 29th, blowing a hooley but good fish coming to tungsten headed nymphs. Your Gammarus patterns taking good fish for me. Thanks.

Looks like you had a great day guys! There really isn't anything better than a Christmas trip to a chalk stream. Nice to see some of those bigger fish coming into play later on in the day!