Lightning takes & no second chances on the Honddu

Had we listened to the weather forecast , we would have given it a miss. Heavy rain moving in by early afternoon and strong winds blowing, it didn't sound very promising. I had a arranged to meet Dave Smith at the Honddu, and when we got there, after a little fine drizzle, we were left with a muggy, overcast morning. It looked great. 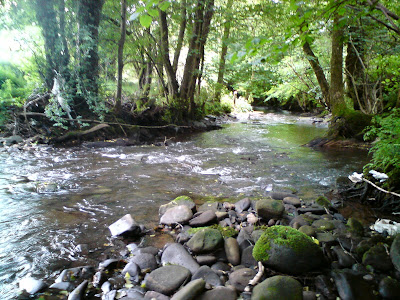 A tributary of the River Monnow, the Honddu is a jewel of a river near the Wales - England border. Flowing over a mixture of bedrock and broken ground, it is a river full of suprises. I had the opportunity here to fish a couple of private beats not far from the head of the river. With alot of fishing avaulable through the Wye and Usk Foundation, access to the water is excellent. The chance to fish some untouched water is, however, inviting.

The water was a little skinny in places, but short rods, light lines and prospecting casts with a sedge patterns, brought a few splashy rises. These fish, throughout the day, would prove hard to connect with. Eventually, first blood went to Dave and he connected with a stunning little brownie. 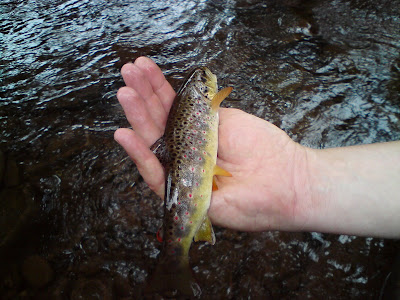 As we made progress up the river, we each connect with fish. To be fair, it took me a while to get my eye in. Missing takes accompanied by some 'early, quick releases' can upset your rhythm and leave you wondering if you should take up golf. This is jot a place to lose confidence whilst casting amongst the trees and between the boulders. Eventually a few fish came to hand - varying between a few ounces and lovely fish around 8 - 10". 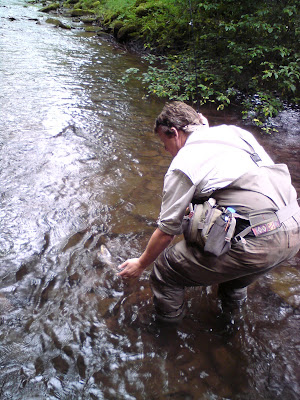 Dave Smith bringing a better fish to hand
After a text book rise to a CDC Dun pattern, it was back onto the sedge, and the Dave found a better sized fish. For a river of this size, these slightly larger fish are a real bonus and success. 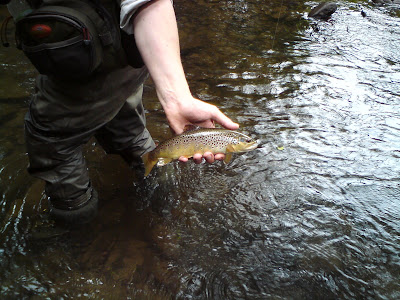 Interesting to see the colour differences between these fish. Some with lots of red markings but other being almost completly brown. 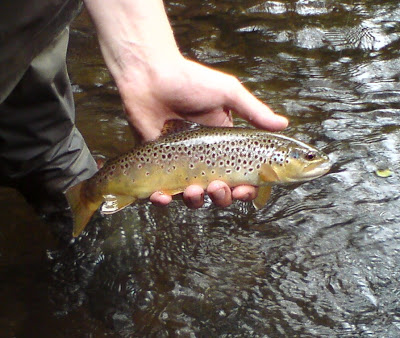 A much darker fish than many of the others we caught - note the lack of red spots
Dave has an uncanny ability to winkle fish from the skinniest of water. No pocket or riffle, however unlikely, goes unchecked and unfished. Excellent fishing. 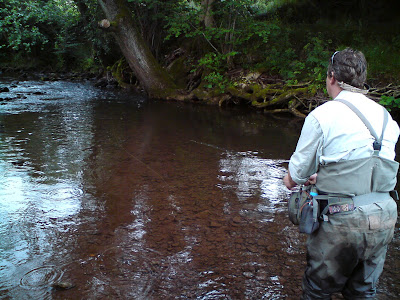 Another promising run covered by DS
I guess we had taken about a dozen fish between us when we stopped for some lunch. The skies were darkening and under the tree canopy, it was akin to fishing at dusk. 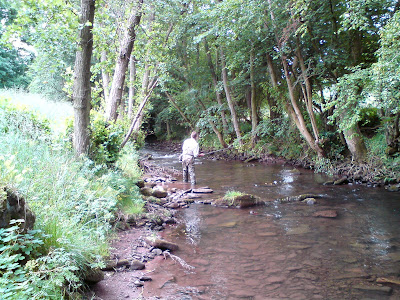 We moved onto to find some different water and continued to bring a few fish up. However, perhaps it was just the forecaster's timing that was out - as we approached early evening, the rain started to fall and didn't look like shifting. We tackled a couple more tasty little runs where fish were showing, but they proved very cagey.

This a fabuolous stream and it's great to fish with someone that exhibits such enthusiasm for their fishing and sorroundings. The Monnow Fisheries Association, as I have mentioned here before, does a huge amount of work on these rivers and streams. 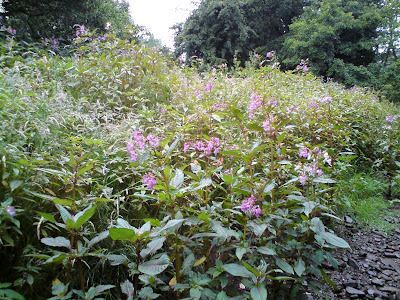 Himalayan Balsam - a wide spread invader on these rivers. Extensive work is being done to try and reduce its effects
There is a huge effort to reduce the impact of Himalayan Balsom, and whilst, it is still evident parts of the stream, their hard work will surely pay-off for the future.