I made it on to the Wellow Brook today. The water was high and with some colour but looked very inviting. A proper April scene. I was introducing Vince Brandon to the river too, so the aim was to get him a few fish. Whilst several flies hatched, there seemed to be little interest in them so opening tactics were to use heavy nymphs, brassies and cased-caddis patterns.

The water was high but nicely coloured: 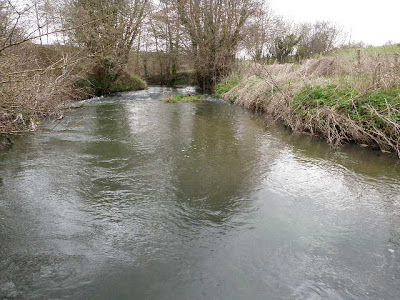 Fishing was slow to start, but short line line nymphing found a few takes for Vince.

I eventually managed a fish on a brassie, fished duo style under a Hi-Vis Balloon caddis.

We worked our way up the stream fishing each likely looking run, bouncing the heavier flies through the deep pools. The extra water and colour certainly meant that the Czech nymphing style helped locate the fish, whilst allowing for a decent presentation.

Vince, using the tree for support, reaches with the short-line nymph: 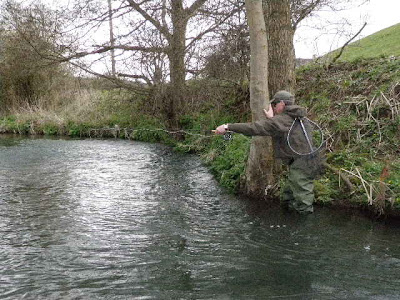 Olives were fluttering off regularly by half past twelve and eventually we found some rising fish - some of the takes being very fast. A change to a parachute emerger found two more fish to the hand.

A change to an emerger re-fuelled our hope of a fish or two: 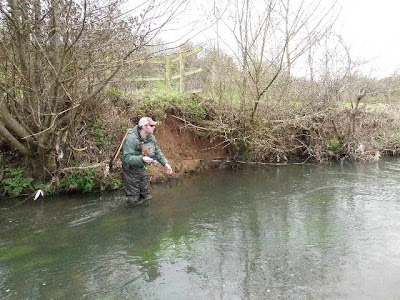 With a 6'6" rod and fast water, even a small fish gives a good account of itself: 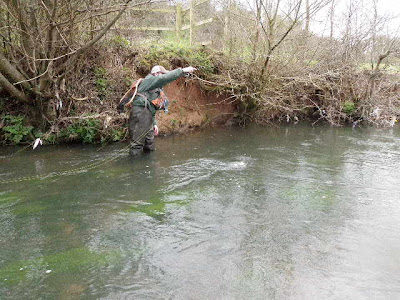 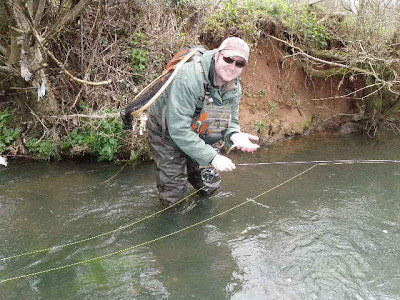 As we neared the end of the middle beat and approached the road bridge, Vince adopted the short line nymph again and after bumping a couple of fish, soon adjusted his strike helping him to hook two fish in quick succession.

Vince works up the run: 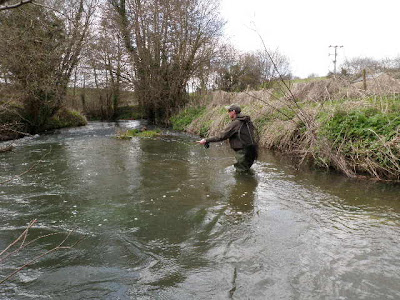 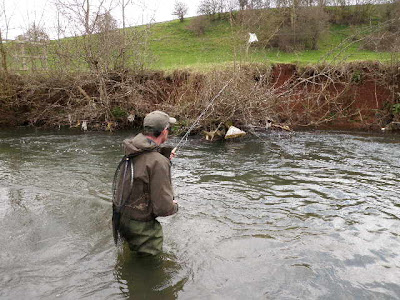 Success! Perseverance with the deeply presented nymph gave a hook up to a decent wild brown - well done Vince!: 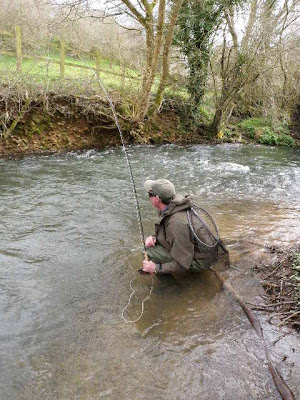 With perhaps a dozen hook-ups between us, a good opening session under tricky but inviting conditions.

A magic day out, I have never known 4 hours pass so quickly. The river changed at every turn and while challenging ,it showed me how much I have to learn. Thank you for the invite and invaluable guidance, I would have been lost.

Nice account. Encouraged by your report I had my first trip on kaa wellow water on sat. Used my new 7 6 weight rod picked up that morn from veals and could have done with some thing smaller. Proper hands and knees adventure fishing- loved it. Had half a dozen nice brownies on gold heads and dries up to 9 inches or so. NOt experienced on rivers least of all small streams so well Chuffed
Will