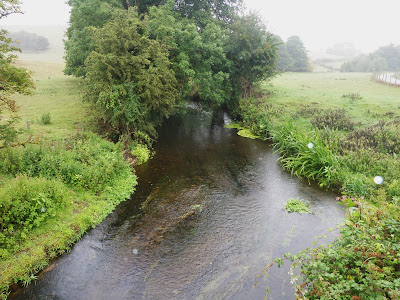 Yesterday's mere hint at some rain turned into bigger and better things today. We had had a fair fall over night and there was plenty more this morning too. When I arrived at the brook it was up a good 5 inches or so compared with last week. There was pale 'tea' colour to the water and it looked promising.

Due to fish with Vince, and having forgotten to phone ahead (sorry Vince!) I had twenty minutes fishing some usually forgotten water. With the rain falling hard, I had decided it best to fish a biggish parachute emerger - giving any willing fish the chance to see the offering amongst the rain-splashed surface. Sure enough, within a few casts through some very inviting water a pretty fish took the fly boldly. 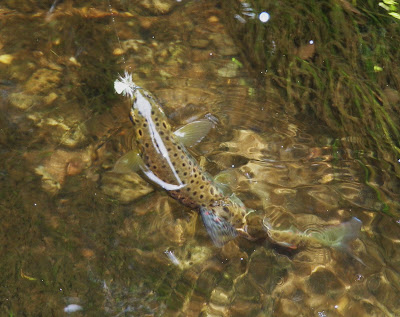 Vince, casting up into some streamy water: 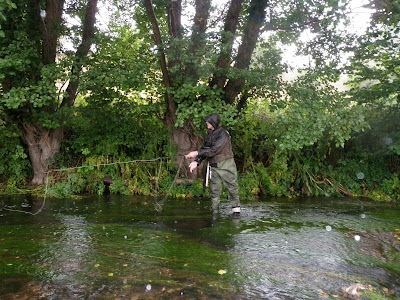 Having been joined by Vince, we found more fish willing to rise but identyfing rises in such conditions is never easy. Eventually more contact was made and well marked fish put a good scrap: always nice to get the short carbon flexing! 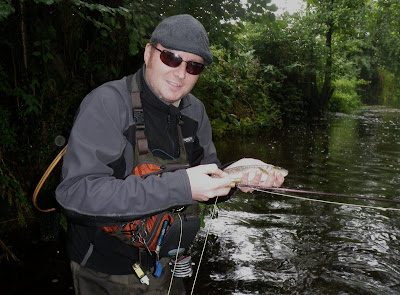 As we waded up the stream, we spooked a lunker in some unlikely water - a good 16-18" fish and certainly the biggest I have seen in the brook. A few tiny sedge were in the air and the occasional appearance of upwings hatching helped to highten our expectations. Although it was hard to spot these, the hatch was likely to be Iron Blue duns - certainly they respond well to these less than summery conditions. 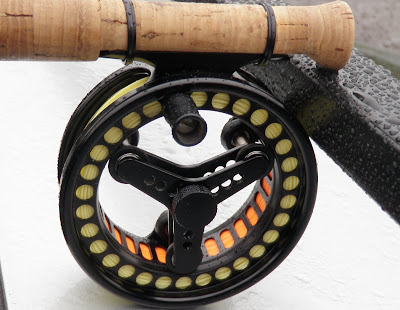 As the rain ceased, we struggled to find the fish again. However, with the extra water, confidence is high that a fresher river, with more willing fish, is on the cards for the next few days.

I carried on upstream after you left with another downpour going on. I think I must have picked the wrong side because my usual starting point had an electric fence across it and the other points were mudslides.

I eventually got in and the water was colouring fast, it was hard to see the bottom in any more than knee depth. I started with a due but gave that up after a tangle as my glasses were soaked and I could not see to re-tie the leader. I went back to a single parachute, rose a fish that I dropped but another stuck on. I do not know how they were picking the fly up as the water was the colour of weak hot chocolate. I tried a heavy nymph in the bigger pools but even with lead and a tungsten bead on a size 14, I was not confident that I was in touch with the fly as it blasted through the pool.

With dinner and more pink chits to obtain, I left about 5.30 but the duns were still coming off.

That is a real nice looking trout. I gotta hand it to ya for fishing in the rain, I am not a big fan of rain. I'm not going to melt mind you but I just hate the fact of getting soaked and sopping wet.

This is definitely awesome! It's a

really helpful article and I hope

you could also get to visit my site

so we can permeate ideas when it

some comments and let us know what

Thanks ahead and have a wonderful