You just cannot trust the weather! We have had so much (needed) rain over the past few months that rivers are flowing at full capacity - and often over. It is refreshing to see the streams in full flow, however it has made for a very difficult season of fly fishing. I was looking forward to tackling a couple of different beats of the River Frome this year in Dorset and had high hopes. We have had a good amount of rain again over the last few days and when I first arrived at a private beat of this magnificent chalkstream, I was bowled over by the amount of water. Pushing through like a steam train, but very clear, it was obvious that fishing could be quite tricky. The lack of fly life also would compound the challenge. However, when offered the chance to fish this beautiful water, who can complain. It is beautiful.

On the first evening, we were able to target some sedge feeding fish. Whilst we covered a good amount of ground to find the fish, they did not disappoint and it wasn't long before fish started to make the most of a moderate gathering of sedge. Indeed, there were some solid fish amongst them and some real 'gulpy' rises. Fishing right into the darkness gave the best of the sport.

I was also looking forward to fishing with John Aplin (Casterbridge Fisheries) the following evening. This beautiful beat of the river holds somehuge brown trout and some magnificent grayling. Indeed a recent fish of over 4lb was landed - and there are reports of others. I met John in the early evening and whetted the appetite looking at pictures of some huge fish whilst drinking coffee. A great start to the evening.

The wind was brisk and fly life was limited - and as a result so where the rising fish. Covering a few moving fish, it was again a sedge that started the success. and whilst these wild fish were not the leviathans we had drooled over earlier, they were beautiful and hard fighting fish. It's an absorbing place. I managed to spend at least 45 minutes over a 2lb+ brown. With it sitting deep, I moved it several times to the fly, but it was not to be. It could be different on another night. 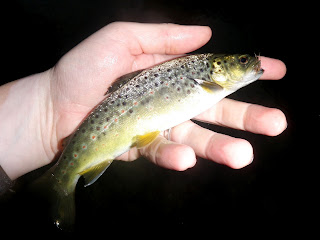 A beautiful river and some stunning wild fish. I will be returning very soon.